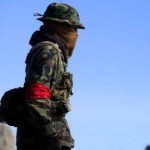 Glenn Martin in his text, “Prevailing Worldviews, wrote, “What we have in Marxism is the most intense effort to date to be absolutely consistent with the presuppositions of process philosophy…” (Martin, 2006).

The Federal Indian Policy of the United States of America derives from a process philosophy embodied in Marxism. While many might not see Marxism within the policy, our federal government has concentrated their solutions on materialism, historicism, and socialism (Martin, 2006, p. 148).

A primary example of Marxist philosophy in Indian Country is the handling of property within the boundaries of American Indian reservations. Karl Marx and Friedrich Engels wrote in their Communist Manifesto in 1848, “In this sense, the theory of the Communists may be summed up in the single sentence: Abolition of private property.” (Karl Marx and Friedrich Engels, 1848). This is exactly what has been done to tribal members within the United States, including our 31st vice-president, Charles Curtis, who was a member of the Kaw tribe. This aberration of constitutional rights continues to this day with little notice or concern from fellow American citizens.

According to American Indian Movement member Jimmy Durham, the United States government has known all along it was supporting a communist political system within Indian Country. Durham wrote a 1974 white paper,

“…Our societies were and are “communistic” societies. The U.S. government has always understood that very well. It has not branded us all these years as communists because we tried to form labor unions or because we hung out with the IWW or the Communist Party but because the U.S. government correctly identified our political system. It did not make that a public issue because that would have been dangerous, and because it has been far more efficient to say that we are savages and primitives…
“Marx used our societies as examples of what he meant by communism on two different occasions in his writings. He said that we are “Primitive Communists.” …We do need to join forces with world Marxism-Leninism, because that is the liberation movement for the world. But we will not come into that world community as a “primitive” younger brother. Our struggle has always been not only to maintain our own lands and culture, but to fight the political system of capitalism itself. (Durham, 1974)”

Worse, callous groups have risen up within Indian Country voicing intent to force change upon other tribal members whether they wanted it or not. Durham stated in his white paper that force might be necessary to get the majority of tribal members to cooperate with what AIM knows to be best. He said,

“There are about a dozen American Indians in the U.S. today who say they are Marxist-Leninists. There are quite a few more who are in Marxist study groups. But the very large majority are, to differing degrees, verbally, “anti-communist” whilst their actions are communistic. But we need to be able to use the tools of Marxism-Leninism if we are to see effectively and fight our enemy. I do not believe that we have time to “let nature take its course,” or to have that kind of liberal “faith in the people” which means escaping one’s own responsibility for leadership and action.
Disorganization, lack of perspective and clarity, and everyone “doing their own thing” are American phenomena which are destructive to our struggle. Lack of strategic unity plays right into the hands of the enemy. A Marxist-Leninist analysis of the detailed realities of our situation, I believe, is the only way to combat such phenomena. (Durham, 1974)”

Yet, despite not only promising violence to force change but at times having carried it out, AIM met sympathy and embrace from the non-tribal public. Despite mistreatment of other tribal members and even murder, court cases against the American Indian Movement for their violence were dismissed. There was almost a nationwide acceptance of their brutality as being somehow necessary for change.

Change has been occurring as a result of their violence and demands. A primary example is the Indian Child Welfare Act. Six years after AIM’s attack on the people of Wounded Knee, Congress gave tribal governments jurisdiction over all children of heritage, whether or not their families lived on the reservation or wanted to be part of Indian Country.

According to the last two U.S. censuses, 75% of tribal members do not live within Indian Country. Many have left due to the crime and corruption and do not want tribal leaders involved with their children. But the philosophy that all people of heritage belong to the tribe and children will suffer emotionally if not connected to Indian Country has been embedded in the minds of United States citizens, who have forgotten about constitutional rights with respect to this segment of neighbors.