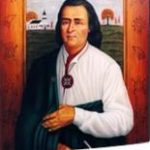 Tribal members chose to become part of the larger colonial communities for various reasons: including but not limited to protection, trade, education, or even to be part of the Christian church.

In 1740, when Samson Occom (Occum), a member of the Mohegan tribe of Connecticut was 19 years old, he asked his mother if he could go to Eleazar Wheelock’s Bible College to learn to read. He wrote later in 1768:

”I was Born and Brought up in the traditional ways…My Parents Lived a wandering life, as did all the Indians at Mohegan. They Chiefly Depended upon Hunting, Fishing, & Fowling for their Living and had no Connection with the English, excepting to Traffic with them in their small Trifles; They Strictly maintained and followed their traditional Ways, Customs & Religion, though there was Some Preaching among them. Once a Fortnight, in ye Summer Season, a Minister from New London used to come up, and everyone attended.  Not that they cared about the Christian Religion, but they had Blankets given to them every Fall of the Year and for these things they would come and there was a Sort of School kept, when I was quite young, but I believe there never was one that ever Learnt to read anything,

”— when I was about 10 Years of age there was a man who went about among the Indian Wigwams, and wherever he Could find the Indian Children, would make them read; but the Children Used to take Care to keep out of his way; —and he used to Catch me Some times and make me Say over my Letters; and I believe I learnt Some of them. But this was Soon over too; and all this Time there was not one amongst us, that made a Profession of Christianity — Neither did we Cultivate our Land, nor kept any Sort of Creatures except Dogs, which we used in Hunting; and we Dwelt in wigwams. These are a Sort of Tents, Covered with Matts, made of Flags.

”And to this Time we were unacquainted with the English Tongue in general though there were a few, who understood a little of it.  When I was 16 years of age, we heard a Strange Rumor among the English, that there were Extraordinary Ministers Preaching from place to Place and a Strange Concern among the White People. This was in the Spring of the Year. But we Saw nothing of these things, till Some Time in the Summer, when Some Ministers began to visit us and Preach the Word of God; and the Common People all Came frequently and exhorted us to the things of God…amongst whom I was one that was Impressed with the things we had heard…After I was awakened & converted, I went to all the meetings, I could come at…And when I was 17 years of age, I had, as I trust, a Discovery of the way of Salvation through Jesus Christ, and was enabl’d to put my trust in him alone for Life & Salvation. From this Time the Distress and Burden of my mind was removed, and I found Serenity and Pleasure of Soul, in Serving God. By this time I just began to Read in the New Testament without Spelling, — and I had a Stronger Desire Still to Learn to read the Word of God, and at the Same Time had an uncommon Pity and Compassion to my Poor Brethren – I used to wish I was capable of Instructing my poor Kindred. I used to think, “if I Could once Learn to Read I would Instruct the poor Children in Reading” —and used frequently to talk with our Indians Concerning Religion. This continued till I was in my 19th year: by this Time I Could Read a little in the Bible. At this Time my Poor Mother was going to Lebanon, and having had Some Knowledge of Eleazar Wheelock and hearing he had a Number of English youth under his Tuition, I wanted to go to him and be with him a week or so, and Desired my Mother to Ask Mr. Wheelock whether he would take me a little while to Instruct me in Reading. Mother did so; and when She Came Back, She Said Mr. Wheelock wanted to See me as Soon as possible. So I went up, thinking I Should be back again in a few Days; when I got up there, he received me With kindness and Compassion and in Stead of Staying a Forthnight or 3 Weeks, I Spent 4 Years with him (Occom (1768) 1982). ”

In all, about 70 tribal-member students attended Wheelock’s Bible college (The Storied History of Dartmouth 2006).

Occom’s “A Short Narrative of My Life” is one of the earliest memoirs written by a tribal member. Occom began writing the narrative, which he originally called a “Short, Plain, and Honest Account of my Self,” in the spring of 1768, soon after he returned from England. It is said that he originally wrote it to “refute false reports that he was a Mohawk, that Wheelock received large sums for his support, and that he had been converted just before the English tour in order to become a special exhibit (Blodgett 27)” (Ruoff n.d.).

This is the story of one man and his community and does not apply to all. Too often it is assumed that the report of one or a few in a people group applies to the entire group.  Humans, even when raised in a tribal community, are individuals. Occom went on to become well-read and well-traveled.  He was an educated, adept, eighteenth century man; not forced to become a Christian, not beaten in school, and not – as many viewed tribal members – an incapable caricature in need of paternalistic care.  Despite full awareness that he was being used as a prop later in life – Occum chose to focus not on the negative of men who he knew were exploiting him, but on the positive of Jesus Christ, who he knew was assisting for him.