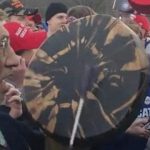 Some people appear to actually WANT a race war and claim it will make life better – but for who? HATE never makes ANYTHING better – for ANY side. Hating and hurting others will rot your heart, soul and spirit – destroying YOU in the end.

Time stamps [compiled by luna lindsey] for all who want to observe main occurrences:

Note: this video is filmed by one of the members of the Hebrew Israelite preacher group.

First 15 minutes of video shows a group of self-claimed Black Hebrew Israelites, preaching that people of color are the chosen ones of Yahuwah (hebrew name for “God the creator”). Several indigenous people approach. Both sides question & argue with one another. Hebrew Israelites slander the native Americans for “worshipping Creation and everything in it, except for the creator himself”. They discuss places of origin, yell over each other, and try to defend each of their own perspectives and spiritual beliefs.

15:14 to 21:55 A group of Native Americans & allies form a circle holding hands and dancing, away from BHIs. Meanwhile, BHI group continue to preach and debate with several curious, upset, and offended individuals, staying on the outskirts of the crowd.

28:52 drum players walk by with drums to set up a small ceremony out of the way.

29:25 BHI reams non-believing PoC as being blind to “the truth that you are black and descendants of Israel” etc.. Racist remarks at whites ensue.

1:09:45 one MAGA kid runs down from the stairs and removes his shirt, yells, riling up a weird brief “haka” dance with other Cov. Catholic students.

1:15:21 to 1:17:16 BHI antagonizes Cov. kids blaming, “This is a bunch of future school shooters!” The students try to defend themselves.

1:17:17 White chaperone yells “hey guys, back it up!” trying to tame the heated confrontation, guiding students to step back. *Note: this whole time, Nathan Philips plays drums. We can’t see what’s happening on that side but you can hear the drum. This is around the same time the viral videos are being filmed inside the center of the crowd which isn’t visible in this clip.

1:26:40 white students cheer and applaud because their school buses finally arrive so they can leave.

1:27:04 BHI walks along. The leader stops and says “what the hell is going on here?” And makes fun of white bystanders who are joined in a prayer circle.

1:31:00 White Christian woman approaches, questioning why BHI are being so disrespectful. Then they argue about beliefs. BHI demands whites “give us our land back”. The remaining footage is more preaching and arguing.