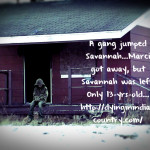 For generations, the residents of the Pine Ridge Reservation have lived with unemployment and poverty rates that have never been seen in the majority community even during the Great Depression.

According to an MSNBC Report on Pine Ridge on May 29, 2014, “Roughly four out of five residents are unemployed and well over half live in deep poverty…… Life expectancy is just 48 years old for men and 52 for women….. About 70 percent of the students will drop out of school before they graduate.”

That last statistic is especially troubling and is inconsistent with the claim frequently stated by tribal leaders that “Our children are sacred”.

According to that same MSNBC Report, “In a startling new draft report, issued in April 2014 by the Bureau of Indian Education which oversees 183 schools on 64 reservations in 23 states, focuses attention on BIE’s inability to deliver a quality education to its students. BIE schools are chronically failing. BIE operates ‘one of the lowest-performing set of schools in the country.’ During the 2012 – 2013 school year, only one out of four BIE-funded schools met state-defined proficiency standards and one out of three were under restructuring due to chronic academic failure…. BIE students performed lower on national assessment tests than students in all but one other major urban school district.” 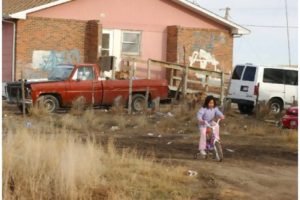 almost total absence of any economic activity on the reservation, it is not surprising that there is a high level of dysfunction as well. This dysfunction is exemplified by the following health and social welfare measures:

* The infant mortality rate at Pine Ridge is one of the highest in the nation at 3 times the national average;
* The incidence of diabetes is 8 times the national average;
* Eight out of every ten people at Pine Ridge are alcoholics. Given this fact it is highly likely that most newborns on this reservation are born with Fetal Alcohol Spectrum Disorder (FASD), a severe developmental delay. Care of children with FASD requires an extended time commitment, great patience, and resilience, none of which is in abundant supply in most reservation homes:
* Drug use and abuse, both prescription and illegal, is rampant;
* The teenage suicide rate is 150 percent of the national average. In the first 8 months of 2015. There were 19 completions by youth between the ages of 9 and 24 and more than 100 attempts by children from the same age group. Within the last week, a 12-year-old girl hanged herself on a tree behind the Sue Anne Big Crow Youth Center. Shortly before a 14-year-old boy recently completed, he was being counseled by one of his teachers. She told him that Lakota tradition teaches that a spirit set free by suicide is doomed to wander the earth in lonely darkness. “You don’t want that, do you?” His response was chilling, “Anything is better than here”.
* The level of domestic violence is at epidemic levels. In CY 2014 the Tribal Department of Public Safety prosecuted 470 cases of domestic violence. During the same period one of the Tribe’s domestic shelters reported they had responded to more than 1,300 cases of domestic violence:
* In CY 2016 there were 17 homicides on Pine Ridge, a rate 4 times the current homicide rate in the city of Chicago:
* For the last several years, the Pine Ridge reservation child protection staff has been investigating, relying on rigorous standards, every case of reported child sexual abuse and confirming, on average, 2 ½ cases per week for every week during each of those years. Considering that most estimates are that 10 percent or less of such abuse is ever reported, the seriousness of this level of child sexual abuse cannot be overstated.
* Research data are clear, children who are sexually abused are 2½ times more likely to attempt and/or complete suicide than children who have not been sexually abused.

On May 1, 2015, in the New York Times Ron Cornelius, the Great Plains Director of the Indian Health Service is quoted as saying, that “the recent suicides were an incredibly sad situation that IHS was committed to working with the tribe to address this heartbreaking problem.” It is not clear to me from the public record available to me just what the IHS has done to fulfill this commitment. At that time I was the ACF Regional Administrator in Denver and heard from friends on and around Pine Ridge, “There are a lot of ‘suits’ traveling to Pine Ridge. They are not meeting with anyone from the Reservation. They spend all of their time in a conference room talking with each other. They seem to make it a point to avoid any tribal members.”

However, former Pine Ridge Tribal Judge Saunie Wilson, in a power point presentation to a west coast conference on youth suicides in early 2017, described the 20 professionals sent to Pine Ridge by IHS to “solve” the reservation suicide epidemic in the following terms, “They had, No background checks, No licenses to work in South Dakota and No knowledge of reservation culture, mores or society.” Unfortunately, this is the same inept approach IHS used when there was a comparable burst of youth suicides on Montana’s Fort Peck Reservation several years earlier. I was invited by the Tribal Chair to sit in on the IHS meetings with Tribal staff as an impartial observer for the Tribe. As a result, I could observe what IHS was doing in response to the youth suicide burst on that Reservation. They were clearly not effective then. How could they believe they would be effective several years later?

On April 5, 2017, at a meeting of the Pine Ridge Tribal Law and Order Committee, the following statement was made by Richard Little Whiteman, a Council member and Chair of this Committee, “I haven’t seen this level of violence since the 1970s”. The Committee also heard reports that the number of law enforcement officers, once numbering more than 100 sworn officers, now was little more than 20, had the impossible task of policing a geographic area comparable in size to the states of Delaware and Rhode Island combined 7 days a week, 24 hours every day.

What is especially puzzling is the deafening silence from both the media, those who by their titles and their government positions have direct responsibility to correct such problems and those who claim they are advocates working on behalf of the welfare of women and children.

For example, if either the city of Cambridge, MA or Berkeley, CA, each with a total population of approximately 100,000, had the same level of youth suicide completions as Pine Ridge, the following would be occurring:

1. There would be youth suicide completions just about daily in each of these communities.
2. There would not be enough curb space to park all of the media trucks providing a direct link to the community for their viewers. After all the media had ignored multiple detailed, factual reports about the dysfunction in these communities and predictions about what would follow from that dysfunction. Recognizing their prior error in not covering all of the dysfunction, media outlets were competing to provide the most offensive coverage. They characterized their coverage as “presenting the facts.”
3. Members of Congress would be convening hearings in these communities in an attempt to elicit some hints as to the cause of such dysfunction even though they had never mentioned these communities until the funerals began to be held when the dysfunction in these communities could no longer be ignored. Based on past experience the best that the local congressional delegation will be able to do is to appoint a study committee charged with reporting back on the cause of all the suicides within three years. No action would have to be taken to assist these communities until the study report was produced.
4. Advocates would be elbowing their way to get in front of any operating TV camera to push their unique solutions to such dysfunction even though they had not only known about the extreme dysfunction in these communities but they had also been silent about it until the funerals began.
5. State, county, and local officials would point at each other, claiming they had little or no responsibility to correct these problems. It was the responsibility of that “other guy” (whoever that unidentified person was) until federal funds were made available. Then the competition would be cut-throat. Each would cite their “expertise” on matters of this kind even though each had just established an extensive written record claiming they knew nothing about such matters in their efforts to avoid any responsibility (political punishment for refusing to deal with the dysfunction in their communities until the funerals began) for what was happening in these communities.
6. Federal officials whose organizations had been widely praised for formally adopting mission statements claiming they were responsible for the well-being of every citizen in their service area would initially deny any responsibility for such dysfunction, pointing at state, county or local officials as the parties responsible for addressing and correcting such behavior. When and if Congress appropriates funds to address and correct these problems, these same federal officials will distribute those funds without first establishing performance measures to determine the effectiveness of how these funds are spent. If the past is any guide, it will be several years before performance measures will be put in place.

If this is the response to the massive dysfunction and resulting epidemic of youthful suicides in communities like Cambridge or Berkeley, can anything better be expected at Pine Ridge?

Pine Ridge is a small, Isolated, rural community with little political power. They have been ignored and will continue to be ignored.

The sexual abuse of American Indian children should have resulted in a high-level commitment to stop the abuse once it had been uncovered years ago.

During the last two Administrations, I brought the twin epidemics of child sexual abuse and child/youthful suicides in Indian Country to the attention of the political leadership of the Administration for Children and Families and the Department of Health and Human Services with multiple, detailed, factual, written presentations. These presentations detailed the pervasive extent of the abuse, the long-term impact on the abused individuals, their families and the community at large and the substantial public cost of such abuse. They had no effect. It was as if they had never been read.

Until one is prepared to focus on and widely and continuously publicize the hypocrisy of those who know the facts and who deny or ignore them, thereby allying themselves with those who abuse children, nothing will be done to correct this barbaric situation. Until those who have chosen silence in the face of widespread child sexual abuse are publicly identified and shamed in all major media outlets for their alliance with sexual predators, attempting to stop the barbarism is a fool’s errand.

Thomas F. Sullivan is a former Regional Administrator for the Administration of Children and Families under the federal HHS.  He was forced out of his job in May, 2016, after defying his DC superiors by repeatedly reporting on child abuse on several reservations.

From Elizabeth Morris, Chair of CAICW:

For more information concerning our federal government’s apathy toward the well-being of tribal members, watch this 20-minute video: