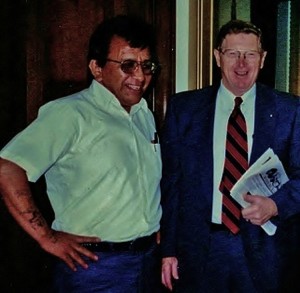 Mark Baker, former legislative director for Senator Conrad Burns and recent Burn’s campaign chairman, was paid $60,000 to be chief lobbyist for the Confederated Salish and Kootenai Tribes in 2003-2004. Working through his Helena firm, Baker also made $120,000 lobbying for CSKT’s S&K Technologies during those years and another $40,000 working for CSKT through the Giacmetto Group. Leo Giacometto was Burns’ chief of staff from 1995-1999.

2003-2004 were the same years in which CSKT was negotiating with feds for management of the National Bison Range. Many who signed petitions and wrote letters asking Burns to oppose the transfer were confused as to why Burns had switched sides on the issue since 1997. Denver FWS officials said Burns had the power to stop the transfer, and with his former statements and the need for Western MT federal jobs to remain open to all, many thought he would.

Whether or not one agrees with the transfer, few want Montana issues to be decided on the basis of who can afford the most influence. In 1997, Burns not only stood against the transfer, but introduced a draft opposing tribal jurisdiction AND supported bill S. 1691, opposing Tribal Sovereign Immunity. Burns said tribal sovereign immunity interfered with Fifth Amendment rights. Now, Burns’ staff has told Montana citizens that Burns won’t support any legislation concerning tribal government unless all 500+ tribes agree to it.

According to a 2006 PoliticalMoneyLine.com report published in Roll Call, Senator Burns pocketed $192,090 from tribal entities over the last few years…

In June of 1997, my husband had a very good meeting with Senator Conrad Burns. Roland, a member of the Minnesota Chippewa Tribe, was in Washington DC to talk to Senator Burns, other Congressmen, and advisor to Secretary of Interior Babbit, James Pipkin, about Federal Indian Policy and the

National Bison Range (NBR). Roland was well received by Senator Burns and they spent about an hour discussing the problems with Tribal sovereignty, including the Indian Child Welfare Act (ICWA), which removes power from parents and gives it to tribal government. But overall, Roland’s main concern was that family and friends were living very unhappy and dangerous lives on the reservation. Having watched many relatives die tragically, he believed the reservation system was hurting tribal members and non-members alike. Roland was pleased to find the Senator in agreement.

Later that winter, Senator Burns demonstrated his position by working on legislation intended to “remove certain fee lands located within each Indian reservation in Montana from jurisdiction of the governing body of the Indian tribe…” In a newspaper article from that time period, he is quoted as saying, “The concept of tribal members enacting legislation that will affect all residents of a reservation without allowing all living on the reservation an equal voice goes against the very words which our founding fathers wrote to establish this great country.”