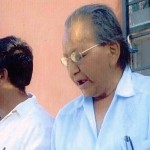 A woman was advocating for rights of tribal members and freedom from tribal gov’t tyranny, while telling me that the only way tribal members can be free from alcohol is through traditional religion.

So… while on the one hand she decried being dictated to and controlled by tribal gov’t, she was attempting to dictate to and control other tribal members when it came to spirituality.

This is a very important point about freedom for tribal members. Some tribal governments do try to dictate that people need to follow traditional religion, not any other. When Roland was testifying in Seattle, a member of the NICWA told us that reservations have a right to keep Christians off their property – and Christians have no right to speak to tribal members about their religion. We asked “What if an elder who has lived there all his life and becomes a Christian wants to talk to his grandchildren about it?” The NICWA representative answered that the grandfather had no right to speak to his grandchildren about it and would have to move.

This is not an unusual point of view within some tribal circles, nor was it unusual in many historical dictatorships that one religion was chosen for the entire country and all had to abide by it. This was why many settlers came to America and why our constitution addressed religion.

Then comes the Indian Child Welfare Act, used by some tribal governments to dictate the religion Indian children are to be raised in. Some times exposure to powwows and traditional Indian religion is mandated by courts and tribal governments as a condition of their foster care. Other times they aren’t even allowed to stay in Christian homes. This can happen even if the parents and grandparents want the children raised as Christians.

In other words, individual freedom is robbed by some tribal governments as well as federal government in applying the ICWA.

My husband and I knew who we wanted to be guardians of our kids if we were to die. We chose a man from our church. His race didn’t matter to us – his spirituality and heart were all that mattered. This is our right as parents to choose. No one else’s.

NO ONE else in America is underneath a law that dictates how you are supposed to spiritually raise your kids. The 1st amendment says “Congress shall make no law respecting an establishment of religion, or prohibiting the free exercise thereof”… but the ICWA Congress enacted comes dangerously close to doing just that.