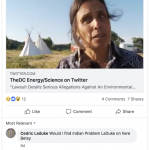 Winona LaDuke, co-founder and executive director of ‘Honor the Earth,’ a group that rakes large amounts of money from extreme left corporations and foundations, has repeatedly turned a blind eye to sexual predators on her staff.

In 2019, a former employee sued Honor the Earth for ignoring sexual harrassment by fellow employee, Michael Dahl, who is a known pedophile. ‘Dahl, according to the lawsuit, has been “credibly accused of using his status as a spiritual leader to commit sexual violence against Native boys” and “The man’s “inappropriate sexual behavior towards boys became an open secret in the White Earth Community.” ‘Honor the Earth’ then engaged in sex discrimination and reprisal against the plaintiff, Margaret Campbell, choosing to protect Dahl and their reputation rather than protect staff and the community.

More recently Nahko “the Bear,” a nationally-known musician who was on the board of ‘Honor the Earth,’ was accused of pedophilia. There are also rumors that LaDuke is protecting accused pedophile Anthony Sul. Disturbingly, LaDuke’s own father, Vincent LaDuke, who claimed to lead his own “tribe,” was once accused of sexually assaulting a minor.

‘Honor the Earth,’ founded in 1993, wants America to switch to a “land-based’ economy, but does not want tribal members to have full title to their property. They want the land to remain in the control of tribal leaders.

LaDuke, who ran for Vice President of the United States in 1996 and 2000 on the Green Party ticket wth Ralph Nader, said in December, 2018, that she wants AOC’s socialist “Green New Deal” to be administered by “Native Americans.” By this, she means only those who adhere to far-left ideology. Conservative tribal members are regularily pushed away by tribal elite who embrace Marxism – not traditional Native American culture and custom. LaDuke said that the “next economy is going to have people like me making decisions. I’d like to be an architect for the next economy. I didn’t like the last one.”

‘Honor the Earth’s’ funding suddenly increased by a factor of 6 in 2016, the year President Trump was elected to office. One grant, $63,000, was given by the Tides Foundation – which recieves millions of dollars from George Soros’s organizations – to interfere with the Dakota Access Pipline. ‘Honor the Earth’ used deceiful propaganda to agitate out-of-state rioters, then transported them to North Dakota to camp on property near construction of the pipeline, which was outside the boundaries of the Standing Rock Reservation. The agitated rioters, who used oil products in one form or another througout their camp, were not told about the oil refinery, pipeline, and oil wells owned by the Three Affiliated Tribes – the MHA Nation – on the Fort Berthold Reservation 125 miles or so north on the very same river. They were only told to protest the Dakota Access Pipeline. A few months later, the tribal Chair of Standing Rock told the rioters to leave as they were destroying the wetlands they were camping on, bothering residents, expecting too many freebies, and causing too much crime. ‘Honor the Earth’ helped pay for the legal defense of those who were arrested for crimes.

Honor the Earth is now attempting to block the Enbridge Line 3 pipeline — a $2.9 billion project to replace a 1960s oil pipeline with a newer, safer one.

With regard to the sexual abuse apparently rampant within the organization, Standing Rock tribal member Jacqueline Keeler, journalist for Pollen Magazine, has done a podcast. Cindy Gomez, from the poscast “A Mexican Crossing Lines” has also talked about the sexual harrassment and abuse.

In one instance in fall 2014, Dahl allegedly asked Campbell in front of a group environmental activists and funders, “Who’d you fuck last night? … You look like you’ve been fucked,” the lawsuit said.

When Campbell notified LaDuke, she dismissed the complaint and said Dahl suffered from “verbal Tourettes,” according to the lawsuit. The suit details a December 2014 encounter in Denver, Colorado, where Dahl “approached with a phallic object in his pocket” and told Campbell “I have something for you.”

Campbell told an Honor the Earth board member about the incident, who responded that “queens will try to get away with that, you just have to learn to stand up for yourself,” according to the complaint. Gender Justice, a non-profit legal advocacy group, filed suit on Campbell’s behalf.

The lawsuit also alleged Dahl was involved in youth organizing despite him being “credibly accused of using his status as a spiritual leader to commit sexual violence against Native boys.”

At a 2015 meeting with fellow tribal activists, Campbell and LaDuke learned Dahl had been accused of sexually abusing a 15-year-old boy by his mother during a 2012 ceremony on the White Earth Reservation.

Campbell’s complaint also mentions a horseback ride in fall 2014 where Dahl allegedly joked about sharing a tent with two young men, including talking about giving boys a “hand job.” LaDuke was on that horseback ride, the complaint said.

The Brainerd Dispatch reports that Dahl also has a felony conviction for allowing three horses to “die from starvation, exposure and neglect.” One of the horses “was the great-granddaughter of the famed racing horse Secretariat, a Triple Crown winner in 1973.” The other two rode with ‘Honor the Earth’ at a 2015 event.

The filings from the lawsuit expose several abuses and deceptions, including “allegations about LaDuke’s deceased father Sun Bear and pedophilia/sexual abuse, and false teachings,” questioning of LaDuke’s enrollability at White Earth, and allegations by the White Earth Tribe that LaDuke’s ‘White Earth Land Recovery Project,’ which began in the 1990s, has not yet returned the more than 20,000 acres they acquired through donations back to the tribe. Return of the land to the tribe had been the claimed goal and intent of the project as stated to the donors. Tax documents show that as late as 2019, WELRP had at least 1million in funds available.

Tara Houska, campaign manager for ‘Honor the Earth’ as well as the “Native American Advisor to Bernie Sanders” in 2016, abruptly resigned from ‘Honor the Earth’ in 2019, following the filing of Campbell’s complaint involving Michael Dahl.

Campbell’s lawsuit, which is still in litigation, alleges that LaDuke has used her influence to prevent Campbell from being hired elsewhere. Michael Dahl, on the other hand, was hired by the Detroit Lakes public school district in 2016 to teach tribal culture and language.

We hope the courts will hold LaDuke and ‘Honor the Earth accountable for the harm they and Dahl have caused.